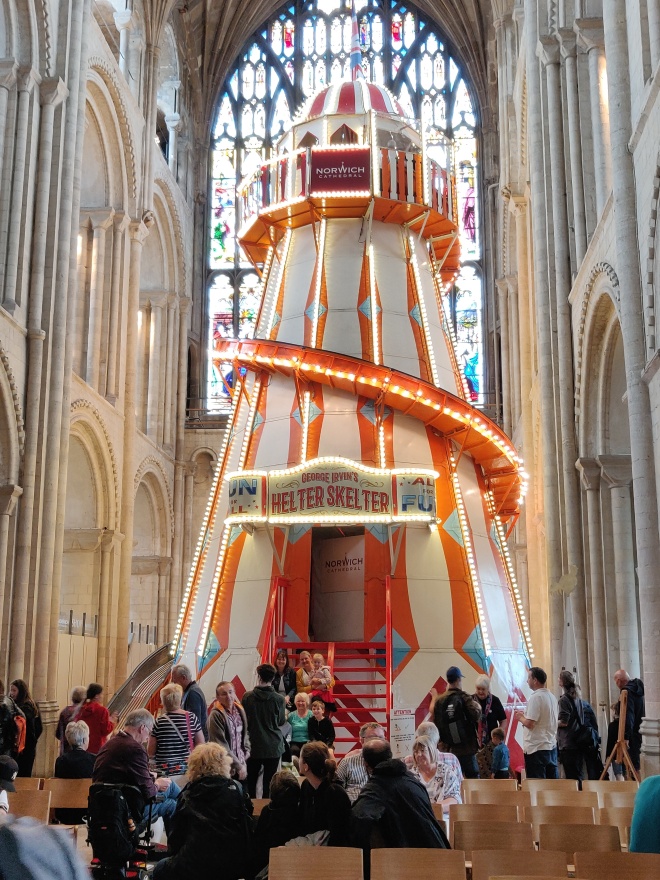 For ten days or so in August, it appeared that Brexit was not the only topic to divide national opinion but whether the decision to install a helter skelter within the Nave of Norwich Cathedral was really a good or a bad idea! Certainly, The Dean, The Very Revd Jane Hedges, appeared to be enjoying herself as she came swishing down the slide accompanied by a number of her Cathedral’s choristers captured on the BBC’s national news, but the wisdom of such a move was soon brought into question by The Right Revd Dr Gavin Ashenden (former chaplain to the Queen), who thought that the whole enterprise ‘smacked of desperation’ as the Cathedral tried to tempt visitors through its doors. He was concerned that the apparent frivolity of the helter skelter detracted from the holiness of the place; the awesome nature of God and the seriously sacrificial nature of the Gospel as demonstrated by Jesus and his death upon the cross. The vast and awesome nature of the Cathedral space with its north and south transepts symbolically representing the cross could and should encourage people to look upwards and prayerfully contemplate the presence of God – if only they weren’t distracted!

Ironically, this inspirational aspect of the building was not lost on the Cathedral staff whose campaign was entitled ‘Seeing it differently’, encouraging people to use their imaginations as they saw the Cathedral from a new perspective engageing with its structure and ‘salvation story’ as they admired its ancient roof bosses which depict the whole Bible story from Genesis to Revelation – all easier to see from the slide’s 40ft high viewing platform.

In response to Gavin Ashenden’s criticism, Diarmaid MacCulloch, Professor of the History of the Church at Oxford University observed that although some would think that the installation of the helter skelter was ‘trendy’ and a somewhat ‘undignified’ attempt to appeal to people in an increasingly secular society, in reality Cathedral attendances are growing and “so this shouldn’t be seen as a desperate attempt to get people in the building”.

So what is it? Well in my view – it is a joyful invitation! It’s a joyful invitation not only to encourage people into the building – but to make them feel welcome and what could be more welcoming than effectively saying ‘here you are – ride this! It’s fun!’ So many people, even Christians, tend to think of God as a great big killjoy and nothing could be further from the truth. God himself knows joy and he wants his people to know joy too. Psalm 104.31 speaks of God as rejoicing in all of his creative works – and what is the pinnacle of his creation? We are! Of course we should naturally respect God and honour his name but we should never, ever forget that God rejoices in us – because in and through Christ he loves us. Of course, being welcomed into the Cathedral is one thing, but if through that one visit, experience or conversation someone finds faith in God and wants to know more about the Cathedral, and it’s worship then how much more glorious and joyful is that! A simple welcome into the Cathedral becomes a joyful invitation into the ‘Kingdom of God’. So, perhaps for a mere ten days the helter skelter in the Nave should be viewed not so much a distraction to heartfelt worship and prayer – but as a warm invitation and proper attraction to it.

May the glory of the Lord endure forever; may he rejoice in all his works. Psalm 104.31