It’s 12th December and I’m writing this letter on the day of the General Election! Although it may have been interesting to write after the Election and once the result is known, I thought that perhaps it might be fairer and more helpful to write a comment before we do so! Because it seems to me that one of the things that the election has drawn out and made clear is just how divided we are as a nation! It’s not just simply a case as to whether one voted Labour or Conservative, Liberal Democrat, Brexit or Green – the divisions in our society are much broader and deeper than that; whether one voted for ‘Leave’ or ‘Remain’; whether you be rich or poor; privileged or disadvantaged; old or young; male or female; employed or unemployed; from the north or the south; socially conservative or liberal; married or not – and all these things challenge and shape our perspective. Not only this but despite the fact that our parliamentary system isn’t supposed to be presidential, the focus was very much on personalities rather than policy – with some of the language used being vile and abusive. So where can we find unity and how can we develop trust?

It’s interesting to note that the BBC wrote an article entitled Crossing Divides – What unites us: 10 reasons why we’re not a divided nation, in an attempt to find and construct a new sense of unity, being:

1. Being faithful to our partners
2. The principle of equal pay
3. Viewing a woman’s role as no longer in the home
4. Seeing gay relationships as “not wrong at all”
5. Supporting a woman’s right to have an abortion
6. Trusting science and scientists
7. Believing in the NHS
8. Believing the Royal Family is important
9. Thinking climate change is at least partly caused by humans
10. Loving David Attenborough, health charities, Heinz, Lego, Google Maps and Malteasers

Whilst the majority of Britain’s may agree with some of these attitudes, it only takes a moment to appreciate that not everyone will agree with all of them, particularly those of a more traditional, socially conservative or religious persuasion. Perhaps in truth this list reflects more of a ‘wish list’ held by those who run the BBC.

For as John Stevens an online commentator observes ‘unity cannot be established or maintained on the basis of values and attitudes that do not in fact capture the hearts and minds of the vast majority of the people’ and I would like to add that it cannot be imposed upon us either.

The Christian will immediately recognise that what we need is a higher narrative, something that looks beyond our immediate, narrow and somewhat self-absorbed (and perhaps selfish) perspective and gives us a new standard and guide to live by, something that transforms our hearts and minds for the better. No one is saying that the Church is perfect or that it can’t ever make mistakes or disagree, but it does have a larger vision than that presented by party politics and a common framework by which it can promote reconciliation and encourage unity and trust within itself and the wider community. A kinder, gentler politics always has to begin with us as we try to serve one another in the loving manner that Christ served us, and I’d like to encourage you all to give it a try.

May I wish you all a very happy and peaceful new year.

“Trust in the LORD with all your heart and lean not on your own understanding; in all your ways acknowledge him, and he will make your paths straight.” Proverbs 3.5-6

IF AT FIRST YOU DON’T SUCCEED TRY, TRY AGAIN seems to be the Prime Minister’s mantra as she tries to get her Brexit deal through Parliament – which seems to be a herculian task given the fact that Parliament had already voted against it by 432 votes to 202 – the biggest government defeat ever known. This immediately led to the leader of the opposition tabling a ‘Vote of No Confidence’ which was also roundly defeated. So, the Prime Minister has the ‘confidence of the house’ but not the power to proceed with her proposed deal which had taken her and her government two years to negotiate. Confusion reigns as politicians and the public alike ponder ‘where do we go from here?’

Typically, most people in such a situation would seek a compromise, but unfortunately the problem fundamentally doesn’t really lend itself to one. Like the Brexit referendum of two years ago, we are still left really with the binary choice of ‘do we stay or do we leave?’ Perhaps in reality, the slogan used by Boris Johnson of ‘having one’s cake and eating it’ whilst Foreign Secretary highlights the Achilles heel of our negotiations; one immediately spotted by the EU’s negotiator Michel Barnier who was unequivocally opposed to the UK ‘cherry picking’ what it did and didn’t want. Our politicians should have not only recognised the result of the referendum but embraced wholeheartedly the intrinsic nature and logic of it as spelt out by the simple Leave means Leave campaign slogan. Then our negotiators might have made more positive headway in the discussions, but instead the constant desire to keep ‘as close a tie as possible’ with the EU, and find a middle way, has spectacularly backfired and come back to haunt it. Unfortunately, there is now no potential solution (Norway, Canada, rescinding article 50, or a second referendum) which doesn’t severely undercut somebody’s redline or in my personal opinion fundamentally undermine the democratic process.

The King James Version of the Bible rather poignantly states that ‘where there is no vision the people perish’ (Proverbs 29.18) and we are in danger of seeing this in reality. The sharing of thoughts views and opinions is of course fundamentally important, but without a clear sense of direction, leadership and vision, we will always struggle. Instead of constantly grand-standing on an issue of such national significance, our politicians should humbly come and work together. Those who aren’t in positions of power and authority shouldn’t act as if they were, but positively try to encourage those who do have the power to make the best decision possible – and those with the power and authority should humbly listen to all sides and respect the fact that they are required to act on behalf of the nation. And we who are members of the general public should recognise the referendum result and prayerfully encourage them to do so. That’s democracy!

If my people …. humble themselves and pray and seek my face and turn from their wicked ways, then I will hear from heaven … forgive their sin and will heal their land.    2 Chronicles 7.14 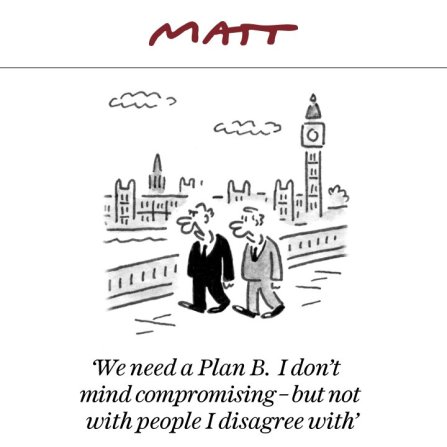